So what about language? Music? Math? Hierarchicalization and governance[2]? How is overall intuition governed and tied together? Is that related to prosopagnosia?

Could I create an intuition-based chess AI? Has that been done before? It doesn't need to care about "chess," just anything that can be hierarchicalized.

I continued ruminating on cognition and AI. I'm sure I could use the same principles to analyze grammar. Start out with words/sentences, see what tends to go together, and then put together a similar idea for morphology (harder because the boundaries are les explicit). I realized that without emotion, it's impossible to have it create anything. It needs semantics to actually do anything. So a universal translator couldn't work, because it won't know the meaning,, emotionally, of anything. So maybe with a dictionary it could do translation. I guess I've hit on how Bing Translate works, somewhat.

But producing/judging grammatical correctness, that's definitely feasible. The question is how to provide negative feedback. And without semantics, there's no way to tie together disparate forms when it comes to exceptions (linking the “exception” with the parent word: e.g. mice –> mouse). I guess the answer to both is correction: have it make guesses (mouses) and correct it. Same thing as it learning chess based on the outcome of its games.

So how, for example, does this get its obvious meaning? 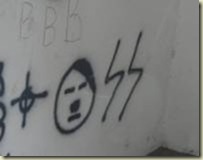 A circle, three horizontal lines, a small rectangle, and a partial crescent. And yet it is so clearly a face, so clearly Hitler. How does the brain do it?

I continued analyzing everything, and then thought for a second about physical attraction. It's not just societal norms. Obviously somehow the learning process transcends generations - was it Mendel that tried clipping wings or tails or something to see if that would evolve? But there must be something that causes this transfer. And then it hit me: evolution. Evolution and brain development are the same thing as well, just on different scales. Everything is so much simpler and less specialized than people think, it often seems to me. Everything is recursive.

The species (or the biosphere) is the brain: a single organism dying before reproducing is the deletion of a brain connection, and random mutations create new connections. So it's a brain without a critical period.

Anyway all this ties back to childhood development, and I guess why it's so important that parents foster inquisitiveness. It is probably natural, and it's just a question of whether or not it's nurtured. If it becomes associated with positive emotions, good; otherwise, bad news.

Anyway, so I made it to the hostel without much trouble. Perfect New York English greeted me: it is actually run by some guy from New Rochelle, Westchester. He'd worked on Wall Street for eight years and then started the hostel a few months ago.

After I settled in, it inevitably started pouring; it felt like the weather had been building to this for a while. I was in the bathroom and couldn't tell if it was crinkling plastic bags at first. I'm rather glad it started after I'd reached the hostel. Mercifully, so far I haven't had to deal with the probably-inevitable challenge of leaving or arriving during rain yet.

So I just sort of chilled out until evening when the rain passed. Bojana[3] had written me - she had just defended her thesis yesterday.

I went for a walk around a bit; by now it was evening. I had another annoying headache, just as in Split; there I'd chalked it up to the air fresheners. I wonder if it's from the weather, then. I'm in a marvelous location, but everything is consequently quite expensive. I had trouble finding reasonably-priced food.

I came back in the early evening and ended up having some tea with the owner (whose name I still don't know). He echoed my middle-eastern experiences[4], and when he said "my very-good friend"[5] I literally tensed and cringed reflexively. Man, those bastards really did ruin me.

He was telling me about the hostel business and said it was working out really well. I was intrigued, and I was hoping it'd be something feasible for me maybe someday, but he has Croatian citizenship which was the immediate hurdle I wanted to know how to pass, so that won't help me.

It was rather hard to sleep; the reviews weren't kidding: it's loud here. There's a piano playing at a nearby café as well as the accompanying rowdy patrons.

[3] Friend from Belgrade, whom I’d met in St. Petersburg.

[4] Everyone trying to rip you off

[5] Always accompanied your being ripped-off